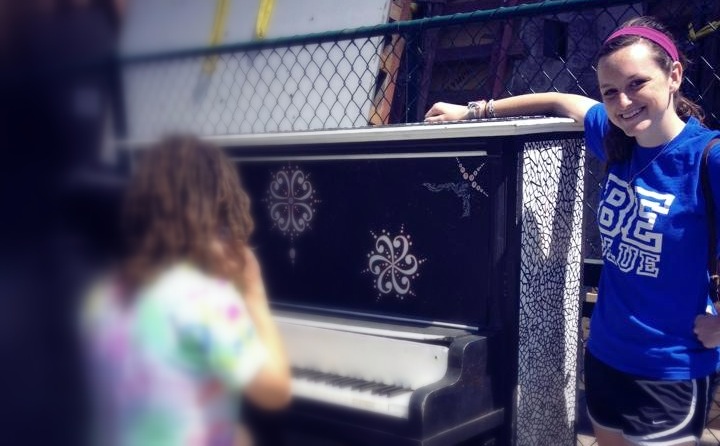 This summer has been eye opening to say the least.

I have I never made so many friends in such a short period of time. I have grown very close to many of them, which has brought me closer to God.

A few friends will especially remain close to my heart. “Hopper” is awoman with pink hair. She’s covered with pen-drawn tattoos.  She looks like a character from another decade. She is a prime reminder to me of why I should never judge a book by its cover. From her appearance alone, society would say that she’s crazy. Talking to her has been one of the biggest blessings I have experienced this entire summer.

Hopper has five daughters ranging from 18 years to two year old twins. The pride she has in her kids is as strong as any mother’s, but her upbringing and family history has not allowed her to keep custody of her daughters. After her own mother experienced a heartbreaking miscarriage, Hopper became pregnant herself with her first daughter. Her mother quickly wanted to take Hopper’s newborn daughter in as her own while mourning the loss of her last chance at having another daughter. After years of fights, legal battles, and another pregnancy, Hopper’s first two daughters remain in her mother’s custody to this day.

Her kind and joyful spirit is constantly reminding me to never take my blessed life for granted. She currently camps out every night, and constantly has to find new places to stay.

One thing I have clearly seen this summer is the reality of “relationship for the sake of survival.” Since I met Hopper a couple months ago, she has had three boyfriends and countless other men surrounding her. She would often tell me that her boyfriend was out spanging (panhandling) so that they could try to get into a motel for the night. This tactic kept her feeling loved and safe on some days, yet it inevitably led to heartbreak and ugly breakups the next. It was hard for me to watch her continually get into new relationships when I could see where it was leading. I have no idea what it’s like to be in her position. It is a way of life for street kids to feel taken care of as they “fall in love.” The ongoing cycle of suffering begins again when the one they love finds a better place or better option for themselves.

This summer has made a big impact on me. I find it difficult to leave Dry Bones and go back to an environment desensitized to suffering; where the struggle of life is at least more hidden. Many of the street kids have shared their thoughts on the way the world should be. Their idealistic dreams have now influenced what I think the world should look like too. My summer in Denver and my new friends have changed the way I will forever view the world.